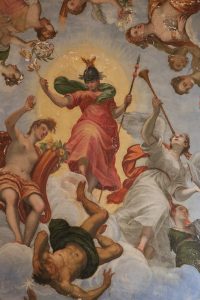 From Mythos to Logos: Andrea Palladio, Freemasonry and the Triumph of Minerva, was published in May 2019 by Brill publishers and editor Walter S. Melion, as part of their Studies on Art, Art History, and Intellectual History series.

This new book provides an interpretive lens to explore how myth was used to encode sixteenth-century, Italian works of architecture and their frescoed interiors with Logos– providing powerful insights that promote a way of being in a world in which peace and freedom are the greatest hallmarks of society. Leaning heavily on the intersection between myth and philosophy, Michael Coughlin convincingly argues Freemasonry began in the Italian city of Vicenza in 1546, offering fresh insight into the origin of Freemasonry, one of the most powerful and longstanding organizations in the world – one in the midst of a popularity and membership boom that is unprecedented.

Michael Coughlin’s next book project explores the philosophical implications of descriptive geometry in art, and linear perspective’s role as an index for the assessment of Renaissance ingenuity. By considering the varieties of Renaissance perspective as they evolved alongside efforts to eliminate uncertainty, this study explores how geometric considerations of the present were overshadowed by logistic concerns for future unknowns. His study focuses on how ingenuity became conceptualized as preventative in nature, encompassing matters of prognosis and forecast directed at overcoming uncertainty.